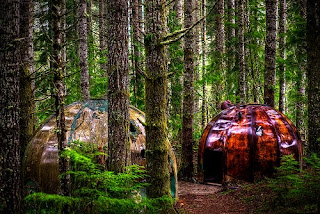 No, I haven't abandoned you.  I found myself in the middle of beautiful Cook Forest (pictured above) on a camping trip with 9 impressionable teenagers. No, these huts/yurts/whatever beautiful pieces of art were not what we stayed in. But the woods were truly that beautiful... and a girl can wish.
I was more glad than you can imagine that I'd given myself some reasonable exceptions/guidelines for feasting, because hauling around several gallons of juice in the middle of the summer in the middle of the woods was not happening. Especially when you're carting a bunch of preteen and teenage girls and trying to teach them to treat their bodies like temples instead of borderline eating-disorder meccas and then trying to explain why you're not consuming solids.
The trip started with me trying to super load on my juices for the day before heading out. This was good in theory, since we were getting in later and I could get my feast done right at least one day. But the drive was nearly 3 hours long... and it was a lot of juice. Fun stuff. Lesson learned: just take a cooler and sip the juice while everyone else pounds Monsters.
This was followed by two glorious days of soft fruit - mostly melon. Cantaloupe in shades of orange, so ripe and luscious that it was silk in texture - the scent filling the air for a distance of a hundred feet.  Watermelon running with juices over the hands and arms and soaking down into the ground like the ancient drink offering. Peaches bursting with flesh so saturated that each bite literally juiced itself upon contact with ones lips. Good stuff. Of course I underestimated the fact that in nature, surrounded by beauty, and with plentiful activity, even Standard American Monster Drinkers will raid the fruit bowl. Lesson learned: Pack more fruit or expect to be hungry.
I also didn't account for what so much fruit would do to my insulin. That's a lot of sugar to load into one's veins at a clip, let alone 48 solid hours. Stomach gripes and blood sugar issues finally hit on the way home, leading me directly to the closest bathroom in the nicest Wing Street/Pizza Hut I've ever encountered. Okay to be honest the first one I'd ever entered, but the place was five star in decor. Frealz.
The plan is to juice out green green green and do a little detox tomorrow.
Today's Menu:

OBSERVATIONS
No internetz means no Livestrong. Alas.
MUSINGS and HINTS

Naomi Poe
Several years ago I successfully completed a 30 day juice feast, largely with the help of a then-free juice feasting site. Two years and many pounds later, having decided to get control of a spiraling weight and eating pattern, I sadly found that site to be commercialized - and expensive to join! I believe information should be free. Add to that the frustration of finding most new juice feasting blogs to be woefully short on details other than vague lists of juice combinations, I've decided to pass along what I know, as I take this journey a second time, with recipes and musings for those interested in taking first steps for this journey. And it won't cost you a penny.